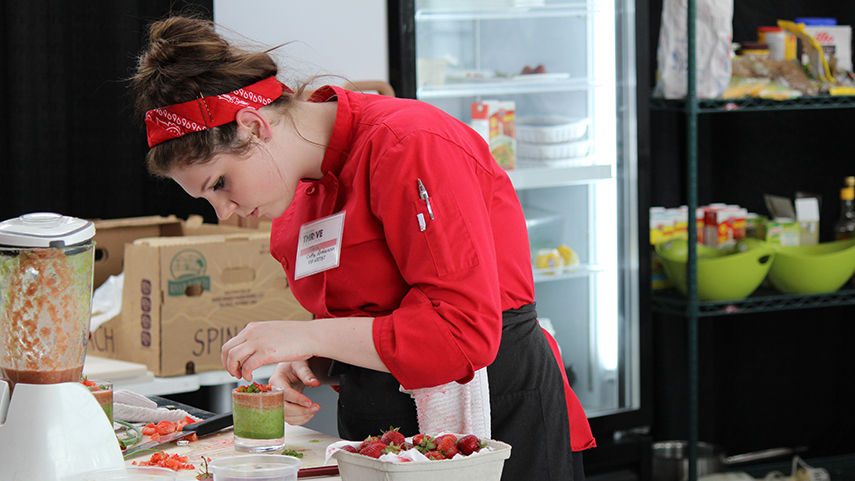 Tala is a great example of a student who has found their passion and is pursuing it wholeheartedly.  At only 20 years old, Tala is confident that she wants to be in culinary arts and is currently working on finishing the Culinary Arts program at Thompson Rivers University in Kamloops.

Growing up, Tala’s mother worked hard as a single parent to provide for her family.  “Sometimes she worked three jobs at a time to provide a stable home environment for me,” says Tala.  “She is my greatest inspiration, proving to me that every obstacle can be achieved if you work hard enough.”  Growing up in a small town, many of Tala’s friends turned to recreational drugs and alcohol, a path that she wisely chose to stay far away from.

As Tala worked her way through school she discovered a passion for cooking, a passion that would lead her to applying for the Culinary Arts program at Thompson Rivers University. After a suggestion by Tala’s boyfriend’s mother she reached out to the STAND Foundation, and was awarded a grant of $2,000 towards her schooling.

“On my own, I would have had to work and save diligently for at least a year and a half before being able to attend my first year of studies.  STAND made it possible for me to get that early start, which has opened up many opportunities for me.”  Tala has taken her passion for cooking to the next level; she is currently employed part-time and working with a chef who herself is a graduate of the Thompson Rivers program and acts as a mentor to Tala.  Through her hard work and networking she has also had the opportunity to compete in an Iron Chef competitive cooking competition and is on her way to opening her own restaurant.

“The program has afforded me so much opportunity for growth.  I used to be a timid person, but after working in a kitchen and being surrounded by other people as passionate as I am, I feel like I am finally coming into my own and now I’m the one starting conversations!  It hasn’t been an easy road, but one that is very fulfilling.  To me, it’s not about how much money I make, or how many people know my name. It’s just about being comfortable where I am, and happy with what I’m doing. I wake up for work every morning, and I am HAPPY to be going, because I love my job and what I do.”