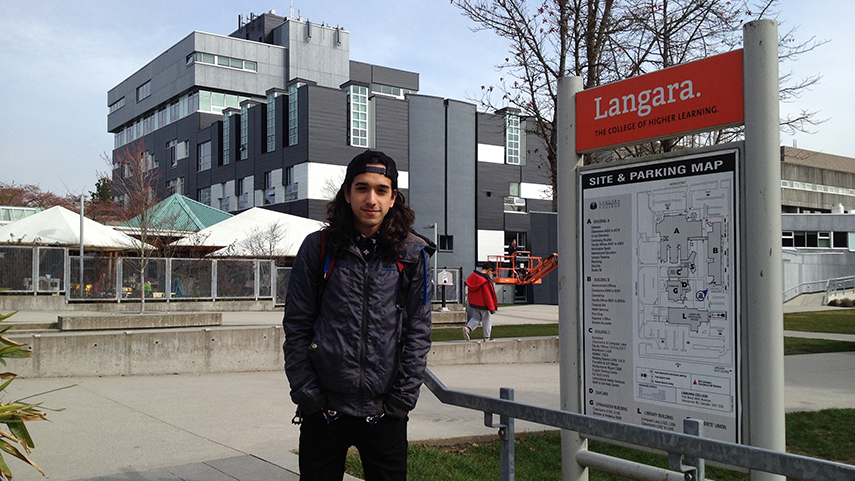 Pablo was born and raised in East Vancouver to South American parents. His mother had fled from Chile because of political instability and his father, from Columbia, because of the dangerous drug cartels. He says his parents came to Canada in order to give their children the best chance at a successful life as they could. The result was a great deal of expectations placed upon him and his sister.

Pablo started high school at a private school. Though he came from a working-class family, his parents scraped together what they could to pay for tuition. Private school, he says looking back on it, wasn’t a good fit for him. He says he neither enjoyed his time there nor excelled in his classes. His parents couldn’t afford to put both him and his sister in private school, so they chose to send his sister and insisted he go to a smaller school.

Once there, he actually enjoyed the environment, there was less pressure and it fit his personality better. Although he says he enjoyed his time there, he began struggling with mental illness and depression. The intense expectations from his family were too much to bear.  As a result, he began to suffer academically and eventually dropped out in grade nine. Once he was out of school, things went from bad to worse. He started to increasingly use drugs and alcohol to manage his mental health.  He became addicted to heroin at the age of 14. Life was spiraling out of control.

Seeking help, Pablo says he returned to school but bounced around, switching schools five times. Finally, he found his way to Total Ed, a Vancouver School Board alternative learning program.

“I finally felt like I was getting my life together,” says Pablo. “I never thought I’d make it through high school, let alone go on to post-secondary.”

Once there, counselors and teachers taught him that school was worth something and, more importantly, they hammered home the point that his life was worth something. The positive support allowed him to begin to break his spiral of addiction. “I would go to school and try my best. Sometimes I would get sick, and miss school for 2 weeks, but they never gave up on me, so I kept at it,” he says. While going to school and trying to get clean, Pablo also managed to hold a part-time job.  His parents had kicked him out so he had to make rent. He worked in retail and other odd jobs on the side. All the while he struggled to stay clean and on track with his studies.

“It was really not what I wanted to do,” he says, “I saw the dark side and didn’t want to go there anymore.”

Slowly, things got better. His commitment to his studies at Total Ed helped him reconnect with his family. Pablo particularly singles out Roger, a counselor who supported him for the past three years.

Pablo says, “I don’t know how to describe the work that counselors do, but there is something magical about it. They help you set goals and help you achieve them.”

Roger inspired him to want to go to courses, to dig deeper and to strive towards graduation.

“Oh, there were times when it was touch and go for sure,” says Pablo. “But Roger was always there. I had never had much support from peers and students before, it was amazing.”

After a couple years Pablo was almost ready to graduate. He really wanted to focus on becoming the best version of himself. To do so he needed to get away, so he moved to Powell River for a few months.

“It was a really critical point for me,” says Pablo. “I had to deal with a completely new situation, where I didn’t know anyone and was in a small town.” He took extra courses while he was there and graduated when he returned to Vancouver in March of this year.

While Pablo was still attending Total Ed, a counselor named Sue Dowling told him about the STAND Foundation and the possibility of applying for a post-secondary grant. “She said she almost didn’t recognize me, but in a good way!” says Pablo. “She told me all about STAND and practically forced me to apply for the grant.”

Pablo had never considered going to post-secondary. Although he had moved back with his family, they could only afford to send his sister to university. Convinced he wouldn’t win a grant, he applied nonetheless. But while on a camping trip he got the call from a teacher to tell him he had been awarded one after all.

“It was awesome and amazing and I felt like a whole new door opened up out of nowhere,” Pablo says.

Pablo was awarded approximately $5,000 from the STAND Foundation for tuition and textbooks. This year he is attending Langara where he is taking university transfer courses to eventually get into the environmental design program at UBC. He aspires to one day be a green architect, product designer or urban landscaper.

“While in Powell River, I got really interested in the enviro movement and have always loved design and art,” says Pablo, “so this program is perfect for me.”

“STAND and their supporters are doing a really good thing. Many of these kids wouldn’t have ever considered post-secondary as a possibility. STAND makes it real and possible,” he says.